OK, let’s get the basic stuff out of the way. When did the whole art thing come into your radar?

The whole “artist for a living” idea, came up when I was around 18 years old. I was always in to art, but around 17, I realized I could do it for a career.

Only problem was, at that particular time, I didn’t have a media in mind.

What led you to tattooing? Was that your first choice?

No, the first artistic career that I had in mind was actually being an art teacher, but to be perfectly honest I don’t like children.

At 19 I got my first tattoo and it was immediate, like a smack in the face. This is what I could do for a living!

What was your journey from there?

I got an apprenticeship at a shop that was basically a low end street shop. Stayed there for about eight months until I realized the whole situation was pretty negative.

Lots of drugs, I barely learned anything, and my boss even got stabbed! All this was in 2008. After that I was like “hell no I don’t wanna be a part of this, it’s too much madness”.

Still I couldn’t get the idea out of my head that I wanted tattoo, and I knew it couldn’t all be like that. Eventually, with the guidance of an accidental mentor, Ainslie Heinlich, I worked at two more shops with a calmer but still similar atmosphere over the course of the next three years.

I finally settled at Third Dimension Studio and found my forever home. I’ve been there for almost nine years now.

Would you say it was all chaotic, to the point where you weren’t even sure if being a tattoo artist was for you, until you arrived at Third Dimension?

That would definitely be a fair assessment.

How long did it take you at Third Dimension before you mentally settled on tattooing as your career path?

For me, I know I went through a string of shitty shops, thinking I might need to change careers any minute, but even when I finally got a job at a well established street shop, I still had this hit or miss, “not really part of the tattoo community” vibe in the back of my head.

I always knew that I wanted to tattoo, even when I was going through that chaos of trying to find a shop that was my home.

I had been around other tattooers and even been tattooed by some big names. I knew that it wasn’t all like what I had experienced. I knew of Third Dimension was a shop that was a cut above the rest.

To be fair I didn’t even think I would get the job there, but once I was a resident artist, it didn’t take me long to decide it was the place for me.

How long were you at Third Dimension before Brian stopped thinking you were a crackhead?

Haha, jeeze! Omit that! About a year!

So a year in, you felt part of the team?

Ha. Yes, I would say we really became a team after about a year. I was the only woman in the shop and I was young, about 23.

So I think it took some getting used to since the guys were older, at different stages in their careers, and had never worked with a woman before.

Were there some real sketchy characters at the shop in those days?

No. It was mainly Brian Murphy, James “Gritty” Lyons and myself.

We all got on with each other well. I loved those days and we had a healthy revolving schedule of guest artists.

When do you feel you developed your signature style?

I know all of us are constantly evolving, but the better artists have branched off into something  that’s more uniquely theirs.

I feel like I haven’t developed my personal style yet. It’s a work in progress.

I’ve always had love for Traditional and Neo-traditional, but the last three years or so I’ve really been diving deep into black and gray realism.

Do you look up to anyone, tattoo artist or fine artist wise, as a source of inspiration? I know I look at both, and try to incorporate that into my work.

There’s a lot of people I look up to so it would be difficult to list them all. The list is ever evolving, as is my style and I get influenced by new artists all the time.

With Instagram it’s impossible not to draw inspiration from a whole threshold of them. A few tattooers to name would be of course Brian Murphy, Ainslie Heinlich, Mike Moses, Mitchell Allenden, Victor Chill.

Have you forgiven Critter for the turkey yet? (Critter is my dog. Jessica and Brian were watching him when he attacked a neighbor’s pet turkey)

Of course, he’s spawned a myriad of jokes that are undeniable and a killer photo of me holding said turkey in question!

I know you don’t travel much, as far as guest spots and conventions are concerned. Do you feel like you’re missing out on anything?

I don’t travel for work but I travel a lot for pleasure. I have done conventions in the past but I really enjoy being at home in my shop.

[I worked there for a little over a year. Jessica would leave every month it seemed for some adventure. Kayaking, hiking in the mountains, snowboarding, and even going to Thailand.] – Dan Henk

Well, thanks for doing this interview Jessica, and let everyone know how they can get a hold of you! 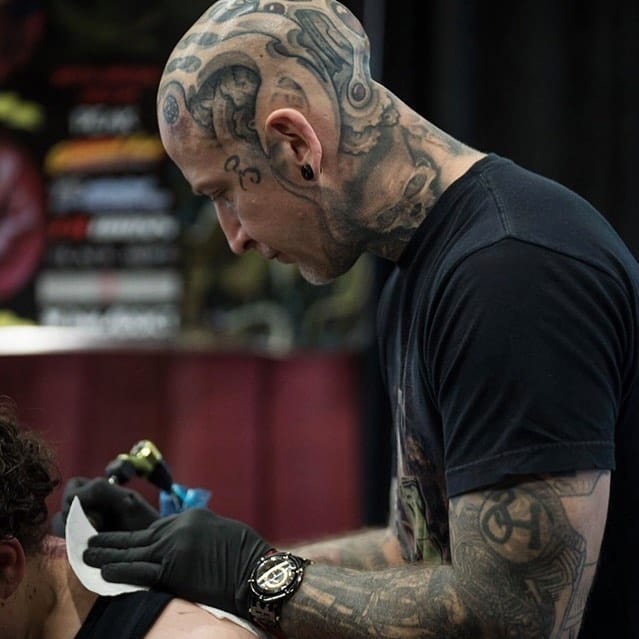