Dragons have been a part of artwork for thousands of years, dating all the way back to ancient Mesopotamia in 5000 BC.

What’s interesting about the dragon is that it plays an important role in folklore from different cultures all around the world, and has endured as a symbol of power and wisdom to this day.

For one of the best examples of this, we look no further than Japan.

Japan has something of a complicated history with tattooing.

The art form has been around since the Jomon period (10,000 BCE-300 CE) but was outlawed in the 19th-century Meiji period, when the country opened its borders to the world.

Although legal today and gradually becoming less stigmatized, many still associate it with crime due to Yakuza tattoos, which were commonplace among Japan’s mafia organisation.

Dragons have been a popular subject throughout Japanese tattoo history since 1757, with the development of woodblock printing and the translation of the Chinese novel Suikoden, which showed heroes with tattoos of dragons, tigers and other such images.

Japanese dragons, known as ryū or tatsu, often have different meanings from their European counterparts, so it’s important to be aware of the history and symbolism before you commit to getting a permanent tattoo.

You also don’t want to go with just any color, as blue, red and grey dragons (along with other colors) have significant connotations within Japanese mythology.

Let’s take a look at some of the meanings behind Japanese dragon tattoos and discuss some design ideas!

Japanese dragon tattoos have different meanings or personalities depending on the color of the design.

We’ll talk a little more about specific colors later, but for now, here a few key colors to be aware of.

Gold dragons represent value and virtue, not be confused with yellow dragons, which represent a noble nature.

There are many legends to draw upon from Japanese mythology when considering a dragon tattoo.

Dragons are first mentioned in the historical texts, Kojiki and Nihongi, which were written in 680 AD and 720 AD and mostly portray ancient dragons as water-gods with serpentine forms.

Some of these have really unique designs, like Yamata no Orochi.

This eight-headed and eight-tailed dragon concealed the legendary sword Kusanagi-no-Tsurugi in one of its tails and was slain by Susanoo, the god of wind and sea, who tricked it into getting drunk on sake.

Later dragons tend to share similarities with Chinese mythology and are often portrayed as good or noble creatures.

Japanese tattoos can be incredibly varied, but there are some key themes that are always popular.

Many of these tattoo designs include iconography from other stories and traditions, like the Japanese phoenix or the Hannya mask, but there are also plenty of different ways to give a simple dragon tattoo a unique look through color, style and even the way the tattoo is applied.

For a Japanese dragon tattoo that’s really authentic, you might want to consider the tebori technique.

This traditional method of tattooing dates all the way back to the start of the Edo period in the 17th-century and involves using a slim bamboo or metal tool called a nomi with a set of needles fastened to its tip to apply the tattoo by hand.

A lot of people think that tebori tattoos will hurt more than using a modern tattoo machine, but this is a common misconception.

Have a search for your nearest Irezumi artist to learn more about the process and Japanese tattoo history.

Earlier we mentioned how colour can change the meaning of a Japanese dragon tattoo.

Black and grey dragons are said to be descended from a thousand year old black and gold dragon and are wise in nature.

They are known as symbols of the North in folklore and caused storms when fighting in the sky, which makes for a dramatic tattoo idea.

Black and grey dragons are a popular tattoo choice, either fully monochrome or with extra flashes of color along their belly or back.

If you like the style of tebori tattoos but want something a little more modern, a Neo-Japanese dragon tattoo is the way to go.

Neo-Japanese tattoos take their inspiration from traditional images and work contemporary elements into the design.

This often means re-imagining historic depictions of Japanese dragons from paintings and woodblock prints in a 3D perspective.

Sleeves are a very popular form of Neo-Japanese dragon tattoo due to the mythological creature’s intricate, twisting shape.

Another creature that appears frequently in Japanese tattoo history and mythology is the tiger.

Just like in Chinese folklore, dragons and tigers were believed to govern elemental forces like wind and rain.

Tigers and dragons can be found in a lot of Azuchi-Momoyama and Edo period artwork, often alongside each other, like in a 16th-century pair of hanging scrolls attributed to Kanō Motonobu.

Today, the pairing is just as popular, with a lot of tattoos depicting the two beasts engaged in battle with one another.

The Japanese phoenix, known as Hō-ō, is another mythological creature that differs greatly from the Western version.

Unlike the Greek phoenix, it features a rooster’s comb, the long neck of a pheasant, the legs of a crane, the tail feathers of a peacock and the beak of a parrot.

Just like a dragon’s scales, color is important here too; its black, white, red, green and yellow plumage represents the five virtues of benevolence, purity, propriety, wisdom and gentleness.

The same phoenix appears in Chinese mythology, where a dragon and a Japanese phoenix tattoo design often symbolizes a successful marriage.

The red dragon is said to represent strength and a fierce nature.

In general, red is an important color in Japan as it appears as the focal point on the nation’s flag and is tied to traditional ceremonies of joy such as weddings and birthdays.

A red dragon tattoo is a popular choice due to the way its distinctive color stands out against black and grey tattoos.

They have been used to represent leadership and are seen as gentle and forgiving in nature.

Japanese blue dragon tattoos are often accompanied by flower petals due to their links with nature.

Even if you’ve never seen a noh play or kagura dance, you’ll probably recognize the Hannya mask as it’s become a familiar icon of Japanese culture and has appeared across various forms of media, particularly in manga, film and video games.

In theater, the Hannya mask represents the souls of women who have turned into demons through jealousy and obsession.

Hannya mask tattoo design shows a range of emotion; as seen from the front it has an angry appearance, yet when it’s tilted down the demonic face appears sorrowful.

There’s no doubt that combining a dragon and a Hannya mask makes for a powerful tattoo.

We really like versions of this that put a Japanese spin on the classic western snake skull tattoo.

Now that we’ve gone over some of the meanings and main themes of Japanese dragon tattoos, it’s time to consider where on your body you want to get inked.

Traditional Japanese tattoos were often applied to the face and across the back and arms (though we don’t recommend going straight for a face tattoo).

In modern Japan, some still associate tattoos with crime and disrespect for the body, though attitudes are shifting.

Chest placement is a popular choice for a Japanese dragon tattoo.

A lot of designs will have the head of the dragon tattooed onto one side of the chest with its body extending across the shoulder and sometimes even into a full sleeve.

Other styles see a dragon facing off against a tiger in a full chest tattoo.

Hand tattoos work well with both traditional and Neo-Japanese dragon designs due to the creature’s flexible shape.

A Japanese dragon tattoo can wrap around the thumb or sit poised on the back of the hand.

Another option for a hand tattoo is to just include the head of the dragon across the back of the hand and knuckles.

Remember when considering a hand tattoo that it will always be visible.

There is still some stigma about tattoos in Japan due to their association with criminal gangs like the Yakuza, so this is something to be aware of if you’re living in the country or planning a visit.

The arm is a great placement for a Japanese dragon tattoo as it allows you to show off the bright colors associated with the creature.

Arm tattoos tend to have the dragon coiled around the lower arm and forearm with its head at the shoulder, sometimes leading into a sleeve.

Smaller designs are also popular, with the dragon curled around the wrist.

Some would say the back is the perfect canvas for a Japanese dragon tattoo.

Both tebori and Neo-Japanese tattoo designs are true works of art that usually involve complex details, so with the scope of a back tattoo you really have an opportunity to show this off.

Although simple tattoo designs are also an option, most back tattoos show one or multiple dragons soaring through the clouds and over the waves.

Just like your arm, a leg tattoo is a good choice for a Japanese dragon, as the length of the area means you can really capture the size of the creature as portrayed in traditional artwork from the 18th-century and earlier.

Some choose to get both legs tattooed with different colors of dragon, which can provide an interesting contrast.

Need some inspiration for your Japanese dragon tattoo?

We’ve got you covered.

Whether you’ve decided to go for a tebori tattoo or something more modern, here are a couple of ideas to spark your imagination.

Large tattoos are a good way to show off dramatic scenes, but it can be even more impressive when something as intricate as a Japanese dragon is presented in a smaller package.

You have a few options to experiment with here, but something that works particularly well is having the dragon coiled around another element.

In keeping with the Japanese theme, try working Japanese flower tattoos or Kanji into the design.

As always, remember to ask an expert or trusted friend when adding symbols or letters that aren’t from your native language into your tattoo to avoid an embarrassing mistranslation.

Some of our favourite Japanese dragon tattoos come in the form of sleeves.

With a long tattoo that covers the length of your arm, there’s ample opportunity to include different colored dragons to represent multiple meanings and create something visually impressive.

As we mentioned earlier, dragons were rulers of the sea in Japanese folklore, and many sleeve designs include elements such as waves and koi fish tattoos.

Dragons have been a hugely popular choice for Japanese tattoos since the 18th-century due to their recognizable design and association with heroic deeds.

Today they are no less popular, and there are several options for traditional-style tattoos or modern interpretations.

For a nod to the folklore and Irezumi tradition, you might want to go for a dragon and Hannya mask design or get a tattoo applied with the tebori technique, while Neo-Japanese tattoos are the way to go for a bold contemporary look.

Check out other articles on Japanese tattoos for more inspiration: 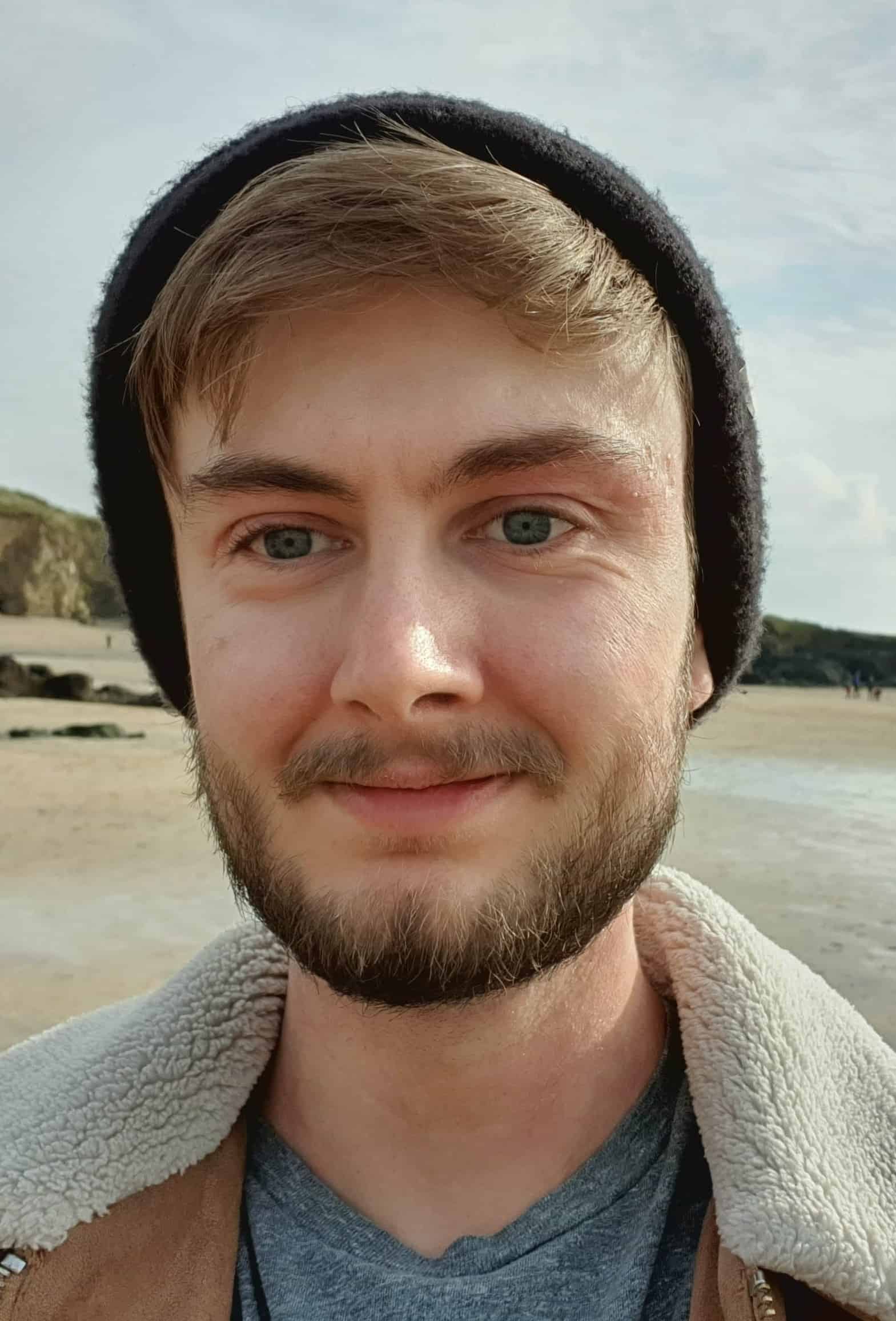 Thomas Arthur is a writer based in London. He graduated from De Montfort University with a creative writing & English degree.